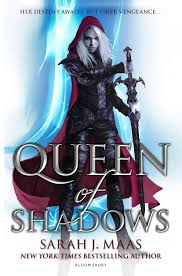 *Warning this post contains spoilers for the first three books in the Throne of Glass series (Throne of Glass, Crown of Midnight and Heir of Fire)*

Goodreads summary:
Everyone Celaena Sardothien loves has been taken from her. But she's at last returned to the empire—for vengeance, to rescue her once-glorious kingdom, and to confront the shadows of her past . . .

Celaena’s epic journey has captured the hearts and imaginations of millions across the globe. This fourth volume will hold readers rapt as Celaena’s story builds to a passionate, agonizing crescendo that might just shatter her world.

My thoughts:
Queen of Shadows is my new favourite book of all time. From the beautiful cover to the words inside,this book is perfection. It's 645 pages of pure epicness and everything I had hoped for.

Before reading Queen of Shadows I'd recommend reading the prequel novellas in The Assassins Blade because now that Aelin is back in Rifthold she encounters a lot of characters that were introduced in the prequels.

In Queen of Shadows Maas brings back old characters and introduces lots of new ones. I really enjoyed reading all of them, they are all fantastic and complex. Everyone knows that the series has had a big cast of strong male characters (from Dorian and Chaol to Rowan and Aedion) and I'm pleased to say that Maas introduces lots of new strong female characters in this book. Up until this point it's only been Aelin and Manon but now there are other who are stepping into the spotlight and I love it. The women in the story are amazing and I'd fight side by side with them any day.

One of my favourite things in this book was the friendships that develop between Aelin and the others. A lot of readers will focus on the romance (which is a big part of the series but I don't want to talk about that because I'll spoil you) but for me it was the platonic relationships that stood out. Aelin has had some pretty bad experiences with friends (i.e. Nehemia) so I was so excited for her when she let these people in.

The pacing, as usual in a Maas book, was perfect. The plots starts rolling almost instantly in the second chapter when Aelin meets with her old master Arobynn. The short chapters are full of twists and turns and the action sequences throughout the novel are amazing as expected and the multiple plot lines made it impossible to put down. Obviously Aelin's point of view was my favourite but I loved the others too.

The ending was spectacular. There were lots of reveals and now I have more questions than answers but that just makes me even more excited for the next book in 2016.