The Call by Peadar Ó Guilín 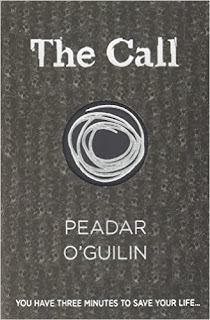 Goodreads Description:
Imagine a world where you might disappear any minute, only to find yourself alone in a grey sickly land, with more horrors in it than you would ever wish to know about. And then you hear a horn and you know that whoever lives in this hell has got your scent and the hunt has already begun.
Could you survive the Call?


My thoughts:
The Call is dark and bloody and I loved it. I couldn't put it down.

Nessa, our main character, is a determined young girl who I really admired. I loved how she didn't let her disability stop her from anything. She had a strong mindset of not falling behind and trying her very best in spite of her legs.
We do get a good grasp of the other characters, but I would have liked a bit more. There was so many characters, I felt like we just skimmed the surface of them.  The story does swap POVs a lot; personally I would have preferred to stay with Nessa because she was my favourite but if we had then we wouldn't really see how bloodthirsty and twisted the Sidhe are.

The plot was super gripping and engaging. I couldn't stop reading, I had to know what was going to happen. It was so fast paced and chapters often ended on a cliffhanger which made me eager to keep reading.

The setting was great. I am Irish so I loved how the story was set in Ireland, I have never come across a YA set here! I loved how our culture really shined through and how some of the names were irish, like there was an Aoife! I have never come across an Aoife in my reading! I loved how our mythology was woven into the story with the faeries and stuff. Those who don't have Irish/ aren't from Ireland might have a hard time pronouncing a lot of the names/places.

One of my problems with The Call was that the ending wasn't an ending in my eyes. It was a bit anticlimactic. I really hope there is a sequel because there is still a lot of questions unanswered.

The book was marketed as horror but I didn't find it scary at all. It was pretty violent but nothing I haven't read before.

Overall I really enjoyed The Call and will definitely be picking up anything else Peadar Ó Guilin writes, especially if there is a sequel!

My rating: 4 stars
Thanks for reading,
A :)
Follow my blog with Bloglovin
Posted by Aideen at 10:00 1 comment: 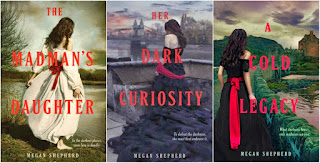 Goodreads Description of book 1, The Madman's Daughter:
Sixteen-year-old Juliet Moreau has built a life for herself in London—working as a maid, attending church on Sundays, and trying not to think about the scandal that ruined her life. After all, no one ever proved the rumors about her father’s gruesome experiments. But when she learns he is alive and continuing his work on a remote tropical island, she is determined to find out if the accusations are true.Accompanied by her father’s handsome young assistant, Montgomery, and an enigmatic castaway, Edward—both of whom she is deeply drawn to—Juliet travels to the island, only to discover the depths of her father’s madness: He has experimented on animals so that they resemble, speak, and behave as humans. And worse, one of the creatures has turned violent and is killing the island’s inhabitants. Torn between horror and scientific curiosity, Juliet knows she must end her father's dangerous experiments and escape her jungle prison before it's too late. Yet as the island falls into chaos, she discovers the extent of her father’s genius—and madness—in her own blood.Inspired by H. G. Wells’s classic The Island of Dr. Moreau, The Madman’s Daughter is a dark and breathless Gothic thriller about the secrets we’ll do anything to know and the truths we’ll go to any lengths to protect.

My thoughts (spoiler free):
The Madman's Daughter Trilogy is a solid YA trilogy. I found it to be good but nothing ground breaking.

It was pretty standard YA. The characters were average and of course there was a love triangle. I really felt like I'd read it before. I wasn't a fan of the love triangle. It consisted of the usualy insta love and the childhood best friend and mysterious new guy. I didn't feel this 'love' Juliet was going on about feeling. I didn't have strong feeling for either of the love interests. I felt like there was no chemistry between the characters, even friendship wise I felt like they were all a bit detached from each other. There was also a lot of secret keeping between theses so called 'friends' and 'love interests' which drove me crazy.

The plot in the first two books was really predictable but there was a good few twists in book 3. The plot was also very slow in book 1- the last 20% saved it for me and made me want to pick up the second book. Book 2 was even slower; I only picked up book 3 because i hate leaving series unfinished if I pass the half way mark.There just wasn't a lot of action happening.

Overall it was an okay series. I think i is better suited for those who haven.t read much YA.

My ratings
The Madman's Daughter: 3.5
Her Dark Curiosity: 3
A Cold Legacy: 4

Follow my blog with Bloglovin
Posted by Aideen at 10:00 No comments:

This Song Will Save Your Life by Leila Sales 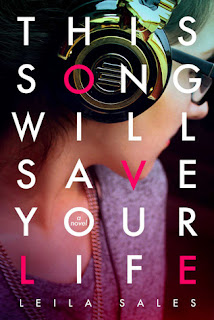 Goodreads Description:
Making friends has never been Elise Dembowski’s strong suit. All throughout her life, she’s been the butt of every joke and the outsider in every conversation. When a final attempt at popularity fails, Elise nearly gives up. Then she stumbles upon a warehouse party where she meets Vicky, a girl in a band who accepts her; Char, a cute, yet mysterious disc jockey; Pippa, a carefree spirit from England; and most importantly, a love for DJing.Told in a refreshingly genuine and laugh-out-loud funny voice, This Song Will Save Your Life is an exuberant novel about identity, friendship, and the power of music to bring people together.


My thoughts:
This Song Will Save Your Life is a good book but by no means amazing. Personally I didn't love it.

I usually love a book if I love the characters so I think a big reason why I didn't like This Song Will Save Your Live was because I didn't like Elise. I couldn't relate to her at all and she was so annoying in the beginning with the whole 'I need to change to be cool and impress people' thing going on. Maybe if I'd read this when I was younger I might have liked her better. But I just think you should never change to impress people so her thoughts in the beginning were so irritating to me. She was so judgy as well- she constantly made judgements about people who she didn't even know-it annoyed me so much. She bashed on music she wasn't into, musicians, her classmates, everything! She was so hypocritical- she didn't want other people to judge her and she was going around judging them!

I felt like the story was way too short. The characters were not fleshed out enough for me to care about them and the relationships weren't developed enough. I didn't care about Elise's new friendships with these people because I didn't know these people.

I didn't like the ending. A lot stuff was just left hanging and I wanted more closure.

I did like the message of the story but I wanted more from it. It is a story about finding yourself and doing what makes you happy regardless of what others think but I felt like it could have been executed better. I think it's  great message but it's more aimed at younger teens which is why I don't think I enjoyed it much.

Overall, This Song Will Save Your Life, didn't leave a lasting impression on me. I thought it was okay but nothing special.

Follow my blog with Bloglovin
Posted by Aideen at 10:00 No comments:

The Hammer of Thor by Rick Riordan 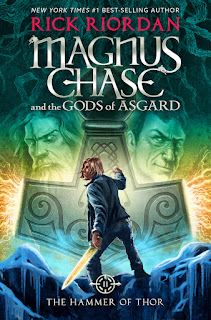 *Warning this post may contain spoilers for the first book in the Magnus Chase and the Gods Asgard Series, The Sword of Summer.

Series: Magnus Chase and the Gods of Asgard, #2

Goodreads Description:
Thor's hammer is missing again. The thunder god has a disturbing habit of misplacing his weapon--the mightiest force in the Nine Worlds. But this time the hammer isn't just lost, it has fallen into enemy hands. If Magnus Chase and his friends can't retrieve the hammer quickly, the mortal worlds will be defenseless against an onslaught of giants. Ragnarok will begin. The Nine Worlds will burn. Unfortunately, the only person who can broker a deal for the hammer's return is the gods' worst enemy, Loki--and the price he wants is very high.

My thoughts:
I absoultely loved The Hammer of Thor! It was even better than Sword of Summer. No second book syndrome here! It was such a wild adventure and I had so much fun reading it!

Firstly the diversity in this book was great! I love how Rick Riordan is writing more diversely with ever book he writes! A gender fluid character is introduced in The Hammer of Thor and it was handled sensitively and in an appropriate way for middle grade readers. I really appreciated how gender fluidity and pronouns were discussed openly.

The Hammer of Thor covers a lot of topics and issues that other authors would normally shy away from. There is a big emphasis on religion and sexuality throughout the story. I love how although Sam is Muslim and Magnus is atheist they both respect each others beliefs.

The characters were just as much fun to read about as they were in The Sword of Summer. Magnus is still a little sarcastic dork and I love it. Sam is as stubborn and badass as ever. (side note: I love how there is no romance between her and Magnus they are just friends! We need more of this in books- boys and girls can be friends without it turning into a romatic relationship). And a new addition to the cast in The Hammer of Thor is Alex. Alex is a child of Loki and a freaking shape shifter! That's all I'll say. Alex is my favourite in the series!!!

The plot was fabulous. It was fast paced with lots of action. The fact that we know a lot about the world already from book 1 means we dive straight into the action. There is not as much info being thrown at the reader so it's quick to read. The plot was engaging and the short chapters made the story fly by.

The Hammer off Tor is hilarious; like all of Riordan's books. We get to meet lots of new wacky gods. And there is a load of  pop culture references like selfies and netflixs. It was great.

And the ending!!!Oh my gods it makes me so excited for the next book!!!! I can't believe this is only a trilogy. I can't wait to see how the story wraps up.

My Rating: 4.5 stars
Thanks for reading,
A :)
Follow my blog with Bloglovin
Posted by Aideen at 10:00 No comments: