The Sword of Summer by Rick Riordan 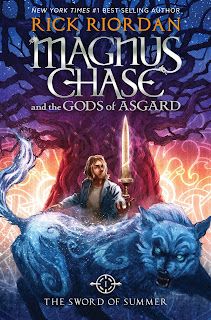 Series: Magnus Chase and the Gods of Asgard

Goodreads summary:
Magnus Chase has always been a troubled kid. Since his mother’s mysterious death, he’s lived alone on the streets of Boston, surviving by his wits, keeping one step ahead of the police and the truant officers.


One day, he’s tracked down by a man he’s never met—a man his mother claimed was dangerous. The man tells him an impossible secret: Magnus is the son of a Norse god.

The Viking myths are true. The gods of Asgard are preparing for war. Trolls, giants and worse monsters are stirring for doomsday. To prevent Ragnarok, Magnus must search the Nine Worlds for a weapon that has been lost for thousands of years.

When an attack by fire giants forces him to choose between his own safety and the lives of hundreds of innocents, Magnus makes a fatal decision.

My thoughts:
*Before getting into my thoughts I just want to make it clear that you do not have to have read Rick Riordan's other series to read Magnus Chase.*

I loved this book. It was a perfect blend of some of my favourite aspects of Riordan's other series. It has the hilarious first person narrative from Percy Jackson and the Olympians and had older characters as the protagonists like him Heroes of Olympus.

I was worried going into the book that the characters would be copies of Percy, Annabeth and all the rest but I was worried for nothing. Magnus and his gang are all unique. One of the best things about this book was the diverse characters.

Magnus is not a copy of Percy. Yes they have similarities but they also have differences. I felt like Magnus was more mature and grown-up than Percy. He sets out on his quest and doesn't get distracted. He's focused on getting things done.

We are introduced to a young Muslim girl Samirah Al-Abbas. I love how openly she talks about her hijab and her arranged marriage that she is excited about. Sam is one of my favourite characters. I think it's great that Rick Riordan has character like Sam in his books it's fantastic to see diversity!

As to be expected, The Sword of Summer was packed with action, adventure and magic. Magic is definitely going to be a big part in this series and I can't wait to learn more.

Norse mythology is obviously a major part of the story. I knew next to nothing about Norse Gods so for me The Sword of Summer was both an education and a fun read. I loved learning about all the gods, monsters,dwarves and elves.

The Sword of Summer was a great introduction to the world and characters. I'm excited to see where the story goes in the next one!

The Queen of the Tearling by Erika Johansen 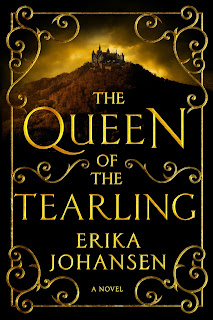 Series:The Queen of the Tearling,#1

Goodreads summary:
An untested young princess must claim her throne, learn to become a queen, and combat a malevolent sorceress in an epic battle between light and darkness in this spectacular debut—the first novel in a trilogy.
Young Kelsea Raleigh was raised in hiding after the death of her mother, Queen Elyssa, far from the intrigues of the royal Keep and in the care of two devoted servants who pledged their lives to protect her. Growing up in a cottage deep in the woods, Kelsea knows little of her kingdom's haunted past . . . or that its fate will soon rest in her hands.

Long ago, Kelsea's forefathers sailed away from a decaying world to establish a new land free of modern technology. Three hundred years later, this feudal society has divided into three fearful nations who pay duties to a fourth: the powerful Mortmesne, ruled by the cunning Red Queen. Now, on Kelsea's nineteenth birthday, the tattered remnants of the Queen's Guard—loyal soldiers who protect the throne—have appeared to escort the princess on a perilous journey to the capital to ascend to her rightful place as the new Queen of the Tearling.

Though born of royal blood and in possession of the Tear sapphire, a jewel of immense power and magic, Kelsea has never felt more uncertain of her ability to rule. But the shocking evil she discovers in the heart of her realm will precipitate an act of immense daring, throwing the entire kingdom into turmoil—and unleashing the Red Queen's vengeance. A cabal of enemies with an array of deadly weapons, from crimson-caped assassins to the darkest blood magic, plots to destroy her. But Kelsea is growing in strength and stealth, her steely resolve earning her loyal allies, including the Queen's Guard, led by the enigmatic Lazarus, and the intriguing outlaw known simply as "the Fetch."
Kelsea's quest to save her kingdom and meet her destiny has only just begun. Riddled with mysteries, betrayals, and treacherous battles, Kelsea's journey is a trial by fire that will either forge a legend . . . or destroy her.

My thoughts:
I've seen a lot of mixed reviews for The Queen of the Tearling, it seems to me that people either loved it or hated it. I'm somewhere in the middle. I liked it but wasn't blown away.
What really made this novel unique to me was the setting. The novel is a dystopian but takes place in a regressed society so it has a historical feel to it. There wasn't much world building and I'd like to know how we discovered the Tear and more about the world before it they found it. I assume this will be explained in more detail in the next book.

While this is classified as a fantasy novel, I felt like there was not much magic going on. I wanted more. The Mort Queen was extremely interesting to me and I hope her character is explored more in the next book. I still have some questions about the magic system and how it came about.

I felt like the plot was slow placed but still held my attention. I was interested for the majority of the book and was sucked into the world of the characters. I think the story is more character driven. Kelsea was an interesting heroine. I liked how she knew about her royal status, a lot of the time in YA, characters are often the "lost princess" type.
My favourite characters were Lazarus "The Mace" and Pen Alcott. Both are Kelsea's guards and I felt like they really stood out compared to the others. Mace is a kind of father figure to Kelsea and Pen a friend.
One of the things I really liked about The Queen of the Tearling was that there was no romance storyline.
My rating: 3.5 stars