Trapped In Silver by Emily Sowden 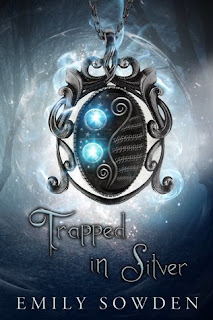 *I received an eARC from the publisher in exchange for an honest review. All opinions are my own.*
Series: The Eldryn Chronicles

Goodreads Description:
Courage comes from a shadowed place in our hearts; a blurred line that straddles love and sheer stupidity.

To seventeen-year-old Ava, wild woodcats, hungry stragglers, and simple-minded townsfolk are the evils she’s grown accustomed to. But when Ethan, an unusual man with eyes of smoke and fire opal, enters her world she quickly understands that there are worse things out there than drunken men and carnivorous forest creatures. She’s a specialised liar and a hell of a fighter, but against a group of animalistic men called Berserkers she struggles to survive the encounter as the desperate swing of a dagger is all it takes to change her life for good.

Half-dead and hunted by the Berserker’s leader when he forms a monstrous obsession with her, Ava escapes his pursuit in an unfamiliar land full of impossible creatures, unlikely allies, and the man she doesn’t know whether to kiss or kill.

But after dreadful news of her missing brother surfaces, Ava becomes more involved in the centuries-long war and begins to unravel the reasons behind her relentless nightmares, discovering truths long-buried in a violent history of love, loss and betrayal.

My thoughts:
I liked Trapped in Silver but didn't love it. It was just meh for me.

My favourite character was Ava. She's headstrong and makes rash decisions but she's independent and sarcastic too which I liked.

There is a lot of characters in Trapped in Silver. There was so many that at times I was confused who was who, especially the side characters and antagonists.

There were a good few relationships developed throughout the story. I really liked Ava and Lavander's friendship. They almost have a sister bond which was nice to read. Their relationship was probably my favourite aspect of the book.

I also liked Ava and Ethan's relationship at times too but not as much. Their dialogue was fun here and there when they got going it got very sassy and flirty which was fun to read. There wasn't enough of it though for me to ship it or care that much about them to be honest.

The plot was all over the place. I don't know if I missed stuff or was reading too fast (I skimmed a lot towards the end to tell you the truth) but I had no idea why the characters were going to the places they were/ doing what they were doing. It was pretty slow and when there was action it was over before it even started or didn't happen at all. It wasn't engaging at all and I kept getting bored which led to me skimming chunks of the story.

The writing wasn't anything special. Not that there's anything wrong with it, it was just simple and plain to me. It was easy to understand and I had no problems with it.

Trapped In Silver is told in dual points of view, Ava and Ethan. Personally I don't think it was necessary to have them both narrating. Ethan's chapters were short, he probably had 10 pages total scattered throughout the book, and they didn't add anything to the story really.

I felt like the building was lacking. We are given very little information on where Ava is from. And I felt that the paranormal stuff was just as vague with were the berserkers and demons came from and how their world is connected to ours and how Ava got there.

Overall I felt like Trapped in Silver was a good read but I had a lot of problems with it.