Pushing the Limits by Katie McGarry 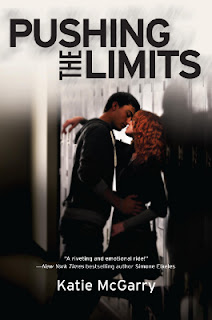 Goodreads Description:
"I won't tell anyone, Echo. I promise." Noah tucked a curl behind my ear. It had been so long since someone touched me like he did. Why did it have to be Noah Hutchins? His dark brown eyes shifted to my covered arms. "You didn't do that-did you? It was done to you?" No one ever asked that question. They stared. They whispered. They laughed. But they never asked.

So wrong for each other...and yet so right.

No one knows what happened the night Echo Emerson went from popular girl with jock boyfriend to gossiped-about outsider with "freaky" scars on her arms. Even Echo can't remember the whole truth of that horrible night. All she knows is that she wants everything to go back to normal. But when Noah Hutchins, the smoking-hot, girl-using loner in the black leather jacket, explodes into her life with his tough attitude and surprising understanding, Echo's world shifts in ways she could never have imagined. They should have nothing in common. And with the secrets they both keep, being together is pretty much impossible.Yet the crazy attraction between them refuses to go away. And Echo has to ask herself just how far they can push the limits and what she'll risk for the one guy who might teach her how to love again...

My thoughts:
I was so surprised by Pushing the Limits. This book needs a new cover and title because they are awful and do not reflect the content. The cover and title made me expect a heavy New Adult romance novel with good girl and a bad boy but that's not really the story; there was actually a lot of depth to it. Obviously there was angst and drama, but not too much!

I really liked Echo straight off the bat. She was so interesting to read about; going in I didn't realise the story was about a girl dealing with trauma and repressed memory. Her determination to find out what happened was admirable and it kept me reading; I really wanted to find out myself. She's sarcastic and feisty and doesn't take anyone's crap and I loved it.

I was not the biggest fan of Noah in the beginning. It was interesting reading about foster kid which is not something I've come across a lot in YA but there was a good few stereotypes and cliches attached to his character. It also irritated me how his narration was full of his thought about Echos body. He never said any of it aloud but it was there and it made me so mad; it did tone down a lot later though and I did eventually warm up to him. I think it was the storyline of how much he loved his brothers and wanted to do whatever it took to get them back was what made me like him. He really is a kind guy, it just took a while for me to like him.

I loved the side characters! Beth and Isaiah, Noah's friends, were my favourite thing ever. They stole the show anytime they were in a scene! I am definitely picking up the companion novels because I hear they are about them! I loved Echo and Noah's therapist,ms Collins, too! She was such a light hearted character and brought so much humour to the story!

There was obviously a romance but I loved how Noah and Echo each had separate storylines and were dealing with their own struggles individually while supporting the other person with theirs.

I can definitely see potential in Katie McGarry's writing to improve and some cliches to be scrapped so I will be reading more of her books in the future, I had fun!