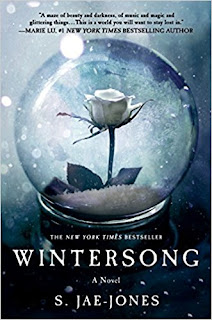 Goodreads Description:
Beware the goblin men and the wares they sell.

All her life, nineteen-year-old Liesl has heard tales of the beautiful, mysterious Goblin King. He is the Lord of Mischief, the Ruler Underground, and the muse around which her music is composed. Yet, as Liesl helps shoulder the burden of running her family’s inn, her dreams of composition and childish fancies about the Goblin King must be set aside in favor of more practical concerns.

But when her sister Käthe is taken by the goblins, Liesl journeys to their realm to rescue her sister and return her to the world above. The Goblin King agrees to let Käthe go—for a price. The life of a maiden must be given to the land, in accordance with the old laws. A life for a life, he says. Without sacrifice, nothing good can grow. Without death, there can be no rebirth. In exchange for her sister’s freedom, Liesl offers her hand in marriage to the Goblin King. He accepts.

Down in the Underground, Liesl discovers that the Goblin King still inspires her—musically, physically, emotionally. Yet even as her talent blossoms, Liesl’s life is slowly fading away, the price she paid for becoming the Goblin King’s bride. As the two of them grow closer, they must learn just what it is they are each willing to sacrifice: her life, her music, or the end of the world.

My thoughts:
I was so sure I was going to love Wintersong, the blurb was so intriguing and I had heard some really great reviews of it but I hated it. I feel bad saying it because I hardly ever dislike books but Wintersong is probably my least favourite book I've read of all time. Get ready for a negative review!

My first big problem was that it felt like it took me forever to read Wintersong. I wasn't busy so I expected to get it done in a few days. It took me 4 days which is how long it usually takes me to read a book this size but it felt way longer. I had such a hard time staying focused; I really struggled to get through it. It just didn't capture my attention. The plot just wasn't interesting, I could have cared less about the characters and the romance was awful. I started skimming about half way and I was seriously considering DNFing Wintersong but I didn't because I have never DNFed a book.

I was so confused at the start; I though Wintersong was going to be fantasy but it read like urban fantasy mixed with historical fiction but then they mention places in the real world but  clearly it wasn't set in modern times and there was no mention of dates... Then the world building in the Underground was well I cant really say anything about it because there was none! We are given the tiniest descriptions of the world and just have to roll with it.

Onto the writing, for the most part I was happy with the writing. There was some very pretty passages scattered throughout the book and some hauntingly beautiful pieces about music. The atmosphere the author created comes and goes though. I did have a few tiny issues though- I found it  a bit repetitive. I noticed that the same adjectives were being used again and again to describe people. There was also some weird sentence structure here and there (I wasn't sure if it was supposed to be more formal and reflect the time period but they kept saying "think you...?" ).

One of the big reasons I don't enjoy books is when I don't like the characters and I was not a fan of any in Wintersong. I didn't care about any of them. Liesl had so many problematic qualities I won't even go into all of them here it would be too long. Some things that turned me off her were that Liesl slut shames her sister and the only thing she cared about was getting the Goblin King to like her/find out if he desired her. I hated it. She was completely reliant on his affection because she needed validation that she was "desirable". The Goblin King was kind of interesting because of all the mystery surrounding him and his struggles with his crown and such but not enough that I was itching to find out more about him.

The main reason I hated this book was the romance. I am going to get into my problems with it now for the rest of this post and it may be a bit spoilery but I think it is implied in the blurb that Liesl and The Goblin King have a relationship.

First of all I found the romance so creepy. The Goblin King is immortal and immortality doesn't usually bother me (look at Sarah J Maas' books- I might not like a few of the ships but that has nothing to do with one person being immortal) but in Wintersong it was so weird. The Goblin King used to hang out with Liesl when she was a child. It is mentioned multiple times they were friends but we never saw them interact as friends and Liesl now thinks all theses visits were figments of her imagination. The Goblin King also says, on a few occasions, that he preferred Liesl when she was little. Creepy right?

There was also some pretty anti-feminist messages threaded throughout the book, the big one I hated was the theme of a girl only learns to define her identity and embrace herself is through her relationship with a man. This message is shoved down readers throats in the second half of the book. Liesl literally says "I want you to find me. Every last bit of me" kind of implying that she needs him to find herself.

I don't usually talk about this stuff on my blog but I have too- sex. Liesl literally says that having sex with and I quote "made her into a woman" and that after "everything was changed now" and she splits her life into "before" and "after". And this is after she spent half the book pressuring him into it because she feels empowered to ignore his 'no'. I was fuming reading this. It is such an unhealthy relationship. I hate how it was portrayed as this defining thing- she was always described at plain and boring before but as special after. I have read a few unhealthy fictional relationships but never this bad. Also there was way too many sex scenes- i can deal with 1 or two but I had to skip over the rest- and the writing was like fanfiction and there was way too many musical metaphors.


I just couldn't get behind their relationship at all- they weren't even friends. There wasn't a single scene in the book where they had fun together. The didn't challenge each other. Their personalities didn't complement each other. It was awful.

I am so sad I disliked Wintersong as much as I did because I really wanted to love it. Wintersong is one of the worst books I've ever read and I will definitely not be picking up anything else by this author.