Ship of the Dead by Rick Riordan 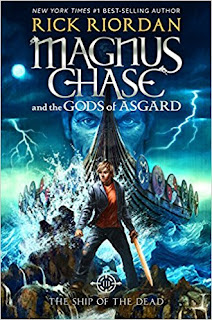 *This post contains spoilers for the first two books in the series: The Sword of Summer and The Hammer of Thor! You can read my review of book 1 here and book 2 here!

Series: Magnus Chase and the Gods of Asgard, #3

Goodreads Description:
Magnus Chase, a once-homeless teen, is a resident of the Hotel Valhalla and one of Odin's chosen warriors. As the son of Frey, the god of summer, fertility, and health, Magnus isn't naturally inclined to fighting. But he has strong and steadfast friends, including Hearthstone the elf, Blitzen the dwarf, and Samirah the Valkyrie, and together they have achieved brave deeds, such as defeating Fenris Wolf and battling giants for Thor's hammer, Mjolnir. Now Magnus and his crew must sail to the farthest borders of Jotunheim and Niflheim in pursuit of Asgard's greatest threat. Will they succeed in their perilous journey, or is Ragnarok lurking on the horizon?

In Ship of the Dead Magnus is so different from the kid we meet in book 1; he has definitely grown up over the course of the trilogy. His narration was just as funny as the previous two books and had me laughing out loud. I loved how loyal he was to his friends and how kindhearted he is; he is such a Hufflepuff!

Of course I loved reading about Sam; she is one of my favourite Riordan characters. I really admire her determination and strength. I also loved how much her faith is discussed and how Ramadan was mentioned and how Sam was in the middle of it during the novel. I have never come across that kind of representation before and it's so important; especially in a series that has a younger fan base.

We get to spend a good chunk of time with Magnus' hall mates in Ship of the Dead so we get to know them better which was fun! I liked T.J. but had a few problems with Mallory; most readers won't pick up on the things that annoyed me as they are all to do with being Irish. In the beginning she is a very stereotypical Irish girl with red hair and temper. She also says Gaelic not Irish when talking about the language we speak- this is a common error most authors make who are not Irish and it annoys me so much; we speak Irish and it is sometimes called Gaeilge NOT gaelic! I did grow to tolerate her by the end because she does do some great things.

Another Irish thing I want to note since I am talking about Mallory; I was surprised Rick Riordan knew about/ mentioned the Vikings in Dublin. I was so glad he did because that's a big part of our history curriculum in primary school! I was also very surprised there was talk about Bloody Friday (1972) and the Troubles because of how taboo it is to talk about it in Ireland. I've never really come across Irish history in my reading before so that was cool.

The plot was pretty standard Rick Riordan; people say his books are very formulaic with the prophecies and quests and they are but I always have fun reading the formula he uses for his plots so I didn't have a problem with it. I still say The Last Olympian is his perfect concluding novel, Ship of the Dead was good but not Oh My God Good.The ending was a bit anticlimactic but you kind of know it is going to be while you are reading, I was hoping it was going to take a twist and get action packed but nope; it was good but nothing amazing which was a bit disappointing.

I felt like Alex, who is my favourite character in the series, didn't have as much page time and s/he did in book 2 and I was a bit sad about that. Alex brings so much fun to the story and whenever we weren't with him/her I was flicking ahead to see when his/her name would pop up.

Note for Percy fans, as we know at the end of Hammer of Thor Annabeth says it is time for Magnus to meet Percy and straight off the bat we have Percy helping Magnus out in Ship of the Dead. There was some Percabeth that had me freaking out because they are adorable. Warning to fans that are expecting loads of Percy; don't expect that. Percy and Annabeth are only present for the first few chapters and while I wished they could have stayed longer it is important to note that this is Magnus' story not theirs.

I definitely think there are going to be more books; there was a tiny hint for a storyline that could be continued in the future. I am going to miss reading about Magnus and his friends, this series is definitely in one of my favourite Rick Riordan's work only after Percy Jackson.