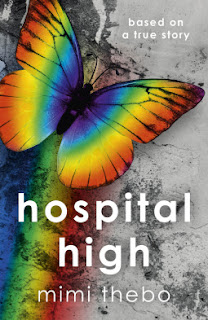 Goodreads Description:
My life had been saved...and boy, was I annoyed. Humour and attitude keep Coco going when things get grim. Her relationships with her mother, hospital staff and other injured teens sustain her when her school friendships fall apart. But although everyone's working to give Coco a normal life, Coco doesn't think 'normal' is enough... When she was fourteen, the author Mimi Thebo died in a car accident. Hospital High is a young adult novel based on the day she died and the subsequent three years spent recovering from the accident.

My thoughts:
I was pleasantly surprised with Hospital High. It is a book very different to what I usually read but decided to give it a go as I won a copy in a giveaway from Hanna Hodgeson (on YouTube). I actually ended up enjoying Hospital High for the most part.

It was definitely hard for me to get into it as there was lots of flashbacks in the beginning and I found myself getting antsy wanting to know more about Coco in the present. A lot of the flashbacks could have been edited down a bit more or put all together. I really stared getting invested at about half way through when new characters were introduced and Coco started making new friends, at that point I started looking forward to reading every night!

Coco, the main character, was not an easy person to get along with, and I found it hard to like her at times and she felt very rough around the edges. She has her struggles and I understand that but at times she really made life more difficult for herself than it needed to be especially in regards to her friendships/social circles.

There wasn't really a plot but I didn't mind, Hospital High is more of a life story since based on true events in the authors life. The story was nice and easy and calming to read and flowed nicely after all the flashbacks in the beginning. I also liked the side stoylines with the hospital staff and some of Coco's friends.

The writing is very simple and easy to follow but sometimes I'd stop and reread parts because the author captured a really complex feeling or idea so perfectly.

You could class Hospital High as kind of historical fiction in a way as it is set in the 70s. We get to see what it's like being a teenager in the 70s which was interesting. That's not something I've ever read before. Most of the historical fiction I read is late 1800s/early 1900s.

The story is mostly set in a hospital and this made it hard for me to connect with the story as luckily I have never had to spent time in a hospital and have never been seriously ill. It was eye opening reading about some of Coco's experiences there with surgeons and staff.

I obviously can't speak for the chronic illness rep in this book but I can only assume it was actuate and sensitively done as the story is based on true life and written as a sort of memoir.

I was surprised that it wasn't really a sad book like I was expecting. There were a few moments here and there but overall there was a more of a sense of calmness than extreme emotion.

Overall I enjoyed Hospital High more than I thought I would it is very different to my usual reads but had a good time reading.