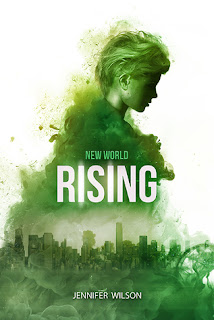 GoodReads description:
Since witnessing her parents' murders at the age of eleven, Phoenix's only purpose in life has been to uphold her mother's dying words- to be strong and survive. But surviving outside of The Walls- outside of The Sanctuary- is more like a drawn-out death sentence. A cruel and ruthless city, Tartarus is run by the Tribes whose motto is simple, "Join or die."

Refusing to join and determined to live, Phoenix fights to survive in this savage world. But who can she trust, when no one can be trusted? Not even herself.

My thoughts (spoiler free):
New World:Rising was such a fast read. It's a dystopian like no other. So captivating I read it in 2 sittings; which is a rare occurrence for me.

The setting was great. Wilson did an excitement job building up this gritty brutal world for the story to take place in. There's The Sanctuary which is built up like a utopia and Tartarus which is the city most if the action takes place in. Wilson clearly describes the 5 tribes in the city and their defining characteristic early on in the novel so we have a sense of whats out there in the city we need to be wary of. She build this fascinating cruel world that I was so interested in.

The plot was fast paced, New World:Rising is definitely a page turner. The GoodReads description doesn't give you much to go on but trust me this story is action packed and full on intense moments that will make you want to stay up all night reading to finish!

I found Phoenix to be a very interesting character. She's independent,smart and badass. Having lost her parents at a young age and trying to survive this brutal world she doesnt have any friends or allies. She has built walls around herself; and it was a pleasure to she her walls start to crumb as she befriends Mouse and Triven. Phoenix's character development was perfectly pace and done in such a subtle way. I loved it.

The ending was crazy. I didn't realise this was a series, so I was freaking out when i finished. I'm so glad there's another book 'cause that cliffhanger!!

If you like dystopian I'd recommend you give New World:Rising a go. It's definitely a new favourite dystopian of mine. Such a good book!

* I received an ecopy of this book from the publisher in exchange for an honest review!*
Posted by Aideen at 16:47

Email ThisBlogThis!Share to TwitterShare to FacebookShare to Pinterest
Labels: Dystopian, YA