The Dreadful Tale of Prosper Redding by Alexandra Bracken 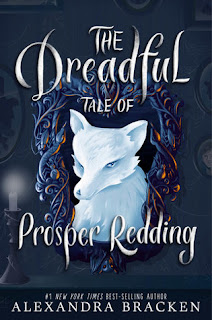 Goodreads Description:
"I would say it's a pleasure to meet thee, Prosperity Oceanus Redding, but truly, I only anticipate the delights of destroying thy happiness."

Prosper is the only unexceptional Redding in his old and storied family history — that is, until he discovers the demon living inside him. Turns out Prosper's great-great-great-great-great-something grandfather made — and then broke — a contract with a malefactor, a demon who exchanges fortune for eternal servitude. And, weirdly enough, four-thousand-year-old Alastor isn't exactly the forgiving type.

The fiend has reawakened with one purpose — to destroy the family whose success he ensured and who then betrayed him. With only days to break the curse and banish Alastor back to the demon realm, Prosper is playing unwilling host to the fiend, who delights in tormenting him with nasty insults and constant attempts trick him into a contract. Yeah, Prosper will take his future without a side of eternal servitude, thanks.

Little does Prosper know, the malefactor's control over his body grows stronger with each passing night, and there's a lot Alastor isn't telling his dim-witted (but admittedly strong-willed) human host.

From #1 New York Times best-selling author Alexandra Bracken comes a tale of betrayal and revenge, of old hurts passed down from generation to generation. Can you ever fully right a wrong, ever truly escape your history? Or will Prosper and Alastor be doomed to repeat it?

My thoughts:
I really enjoyed reading The Dreadful Tale of Prosper Redding. It is such a fun quick story that is light-hearted with a hint of creepy. It is the perfect read for autumn/Halloween for all ages. I went in with high expectations because I love Alexandra Bracken's YA books and I was not disappointed with Prosper.

The main character Prosper was very likeable. He was developed enough that he didn't feel like every other MG 12 year old boy. He has his flaws for sure but he was fun to read about and I loved how he liked art. It was actually the antagonist that stole the show for me though. I loved any time Alastor had page time. His inner monologue with Prosper was hilarious and I found myself flicking the pages looking out for his name/dialogue.

The narration of the story was very interesting; it is told in dual POV but Prosper tells the story in first person whereas we hear from Alastor in the third person. I definitely preferred Alator's narration; he was very funny and I could see why younger readers would be laughing out loud at some of the antics he gets up to.

The plot was probably the weakest aspect of the story but I still really enjoyed it. The plot is not action packed like Bracken's other work; in the story we mostly just follow Prosper around as he adjusts to life with a demon inside him; it was still very enjoyable though. Some aspects were very predicable which is to be expected when the intended audience is 12 year olds and I am almost 21. The ending was amazing and intense and I am so excited to see where this story goes in book 2!

Another aspect I want to note that i liked was that there is an LGBT+ family in the story and it is completely normalised which was great to see in a MG book!


I had so much fun reading The Dreadful Tale of Proper Redding; it was so easy and fun to read, it was nice to have a break from the YA angst and drama I usually read.I am definitely going to pick up the next book when it's out later this year!