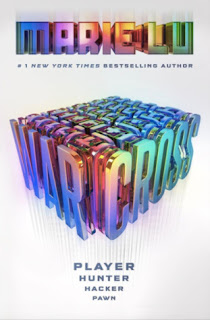 Goodreads Description:
For the millions who log in every day, Warcross isn’t just a game—it’s a way of life. The obsession started ten years ago and its fan base now spans the globe, some eager to escape from reality and others hoping to make a profit. Struggling to make ends meet, teenage hacker Emika Chen works as a bounty hunter, tracking down players who bet on the game illegally. But the bounty hunting world is a competitive one, and survival has not been easy. Needing to make some quick cash, Emika takes a risk and hacks into the opening game of the international Warcross Championships—only to accidentally glitch herself into the action and become an overnight sensation.Convinced she’s going to be arrested, Emika is shocked when instead she gets a call from the game’s creator, the elusive young billionaire Hideo Tanaka, with an irresistible offer. He needs a spy on the inside of this year’s tournament in order to uncover a security problem . . . and he wants Emika for the job. With no time to lose, Emika’s whisked off to Tokyo and thrust into a world of fame and fortune that she’s only dreamed of. But soon her investigation uncovers a sinister plot, with major consequences for the entire Warcross empire.

My thoughts:
Warcross is fantastic! I absolutely loved this sci-fi book more than I thought was possible. I had so much fun reading it.What a whirlwind! I loved how easy it was to fall into it and then to keep reading. I have been a fan of Marie Lu's writing for years and this I think this is her best work to date! Warcross is a new favourite for sure!

The plot was so well paced. I was engaged the whole time and didn't want to put the book down. Warcross is a book that really had me thinking and theorising the whole time; I was constantly trying to guess who was behind the hacking and stuff. It was plot twists galore but I predicted them but I didn't care I saw what was coming because I haven't been that excited to get such a big plot twist since Crown of Midnight back in the day. The plot is action packed and let me tell you Marie Lu is an expert at writing action sequences. All of the warcross tournament matches were my favourite parts; they were so intense and fun to read. All I could think while reading was this needs to be a movie!

I loved the scifi elements and how techy it was and it was so cool imagining it all and the setting. Warcross- the virtual reality world was very well developed. It has been done before but I think Warcross is just such a fun spin on it. Futuristic Tokyo was such a fun and exciting setting. This is such a visual book. Everything is described so well I felt like I could really picture everything and felt like I was there.

Onto the characters: I really liked reading about Emika. She is so smart, a bit too smart sometimes to be realistic but fun nevertheless. I also loved how quirky and different she is from other YA female protagonists. Emkia has rainbow hair and tattoos and skateboards and plays video games. Some of the side characters could have been fleshed out a bit more but it was a very short book so I can't really complain about that. The cast of characters is very diverse; Emkia is Chinese-American, there is a wheelchair user who has a big role and also gay characters.

I loved the cute romance that was on the side; I didn't think I'd ship it but they grew on me and I ended up shipping it so hard, like new obsession shipping it! Hideo won me over pretty quickly with a British accent and rolled up sleeves and cooking for his parents.

Warcorss was fast paced, I loved the setting and characters and just had such an enjoyable time reading! I need book 2 now! I am so excited to see where Marie Lu brings the story now because it could go so many different ways!

Email ThisBlogThis!Share to TwitterShare to FacebookShare to Pinterest
Labels: Duology, Dystopian, Sci-fi, YA