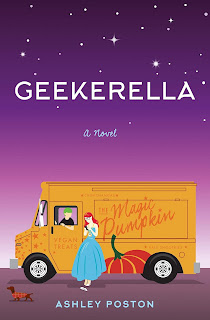 Goodreads Description:
Geek girl Elle Wittimer lives and breathes Starfield, the classic science-fiction series she grew up watching with her late father. So when she sees a cosplay contest for a new Starfield movie, she has to enter. The prize? An invitation to the ExcelsiCon Cosplay Ball and a meet-and-greet with the actor slated to play Federation Prince Carmindor in the reboot. With savings from her gig at the Magic Pumpkin food truck and her dad's old costume, Elle's determined to win - unless her stepsisters get there first.

Teen actor Darien Freeman used to live for cons - before he was famous. Now they're nothing but autographs and awkward meet-and-greets. Playing Carmindor is all he has ever wanted, but Starfield fandom has written him off as just another dumb heartthrob. As ExcelsiCon draws near, Darien feels more and more like a fake - until he meets a girl who shows him otherwise. But when she disappears at midnight, will he ever be able to find her again?

Part-romance, part-love letter to nerd culture, and all totally adorbs, Geekerella is a fairy tale for anyone who believes in the magic of fandom.

My thoughts:
Anyone who's knows me knows I am a huge fan of all things Disney and retelling related so when I picked up Geekerella I was sure I was going into a new favourite book. Unfortunately I was left disappointed. Geekerella fell flat for me and I ended up not enjoying it as much as I thought I would.
Maybe it's because I've read/seen too many retellings of Cinderella but I felt like I was just sitting around waiting for certain aspects of the story to play out. I also think my expectations were way too high; I went in looking forward to a cute fluffy fun read and Geekerella just didn't deliver.

I found Elle to be a very average character. There was nothing interesting about her except that she was a fangirl. I could relate to her a bit because of that but I wasn't emotionally invested in her character. I wasn't rooting for her or happy/sad for her when things when good/bad.

I did enjoy the friendship between Elle and the girl who works at the food truck, Sage. Their relationship was probably the only thing I was interested in. I wish we had more from Sage- she was the only interesting character to me.

I didn't buy into the romance between Elle and Darien. I felt like they didn't know each other that well to love each other so quickly.  They only texted a few times and I felt like the content of the texts wasn't enough for them to fall in love with each other over, felt unrealistic to me.

I definitely think Geekerella was written for the for younger end of YA (13/14ywar olds). The writing was very simplistic and the characters acted quite young to me. I wanted Elle to grow up- she was constantly going on about what she thinks others think of her and never stood up for herself and I wanted her to get over the I'm-not-worthy-of-anything thing going on. I found it super annoying and was rolling my eyes but I think younger readers will probably relate to her in this regard whereas I, as a 21 year old, felt she was acting like a kid.

I did think it was cool that the story centred around fandom and fandom culture. There was some cool references to fandom culture like talk of meet cures and ships and whatnot which was fun.

Overall Geekerella was an alright read but nothing amazing. I think my expectations were too high and a younger reader would have enjoyed it more.

Email ThisBlogThis!Share to TwitterShare to FacebookShare to Pinterest
Labels: Contemporary, YA