Of Fire and Stars by Audrey Coulthurst 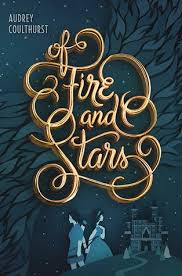 Goodreads Description:
Betrothed since childhood to the prince of Mynaria, Princess Dennaleia has always known what her future holds. Her marriage will seal the alliance between Mynaria and her homeland, protecting her people from other hostile lands. But Denna has a secret. She possesses an Affinity for fire—a dangerous gift for the future queen of a kingdom where magic is forbidden.

Now, Denna must learn the ways of her new home while trying to hide her growing magic. To make matters worse, she must learn to ride Mynaria’s formidable warhorses—and her teacher is the person who intimidates her most, the prickly and unconventional Princess Amaranthine—called Mare—the sister of her betrothed.

When a shocking assassination leaves the kingdom reeling, Mare and Denna reluctantly join forces to search for the culprit. As the two become closer, Mare is surprised by Denna’s intelligence and bravery, while Denna is drawn to Mare’s independent streak. And soon their friendship is threatening to blossom into something more.

But with dangerous conflict brewing that makes the alliance more important than ever, acting on their feelings could be deadly. Forced to choose between their duty and their hearts, Mare and Denna must find a way to save their kingdoms—and each other.

My thoughts:
Been reading a lot of mediocre books recently and this one was no different. Of Fire and Stars could have been great, I was so excited to pick up a book about two princesses falling in love, but it ended up being just average.

The plot was very slow and I had to push myself to keep reading in the beginning. There wasn't much happening and I wasn't interested in the characters so it only picked up for me when I got about half way through.

Random thing that bothered me was everyone's names are so hard to pronounce- dennaleia, amaranthine, Thandillimon - there was just way too many syllables for my brain to comprehend.

It took me a while to warm up to the characters of Mare and Denna. They came across as very young and naive to me and I felt like I couldn't relate to either of them. They were fine but I wanted more backstory and I wanted to know who they were and why they were that way. They felt a bit flat.

The romance is a classic hate to love story which I usually am a sucker for but I just didn't feel it enough to be shipping it. It was also never explained why it was forbidden- I felt like the author just threw that in there to make it more dramatic. It was an alright romance but nothing that I was obsessing over and rooting for. It was cool reading a romance between to girls in a fantasy novel for once but this one just didn't do it for me. If anyone knows any other YA fantasy with LGBT+ characters let me know as there seems to be a lack of them.

World building was very weak. We are given no history as to why Mynaria hates magic. Readers just have to go with it. I also had no idea how the magic worked at all really. I also didn't get a sense of culture from the kingdom. It felt like a very generic fantasy kingdom setting.

There is going to be a second book which makes sense with how this one ended but I don't think I will be picking it. Not because I hated this book, I just didn't have any strong feelings for it. I am a bit disappointed because I really wanted to love this one.

Email ThisBlogThis!Share to TwitterShare to FacebookShare to Pinterest
Labels: Fantasy, LGBT+, Princesses and Princes, YA