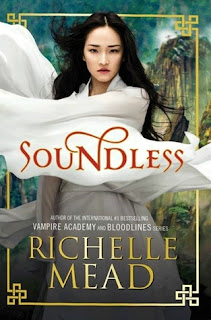 For as long as Fei can remember, there has been no sound in her village, where rocky terrain and frequent avalanches prevent residents from self-sustaining. Fei and her people are at the mercy of a zipline that carries food up the treacherous cliffs from Beiguo, a mysterious faraway kingdom.

When villagers begin to lose their sight, deliveries from the zipline shrink and many go hungry. Fei’s home, the people she loves, and her entire existence is plunged into crisis, under threat of darkness and starvation.

But soon Fei is awoken in the night by a searing noise, and sound becomes her weapon.

Richelle Mead takes readers on a triumphant journey from the peak of Fei’s jagged mountain village to the valley of Beiugo, where a startling truth and an unlikely romance will change her life forever...

Soundless is my least favourite of Meads books to date. That being said I still liked  it. I have heard people say that Soundless is boring and I completely disagree. It was a quick read that I flew through. It held my attention the whole time. My rating isn't higher because it just didn't blow me away.

I had high expectations and unfortunately they weren't met. I thought there would be a lot more fantasy elements than there was. I was looking forward to learn loads about Chinese folklore but there was hardly anything. It was subtly there but not as much as I would have liked.

I was also excited to meet more of Meads characters because she always has fantastic complex characters. However I didn't connect with any of them in Soundless. I found this weird considering how much characters from Meads other books mean to me. Fei was likeable but nothing about her made her stand out in the ever growing sea of YA female protagonists. She felt very flat to me.

Fei's relationship with her sister seemed a bit strange to me. I might have read it wrong but I'm pretty sure  Fei is the younger of the two. But she seemed to take all responsibility for caring for Zhang Jing. Fei acts as if she is the older of the two.

I thought it was very interesting reading about a whole village that can't hear. It was interesting how they used different ways to communicate, like by signing and through painting.

The romance between Fei and Li Wei was a sweet love story but it wasn't anything memorable.

There were a few parts that I liked such as when they begin their journey down the cliffs and the last few chapters.

All in all I didn't feel like I was reading a Richelle Mead book. It lacked the complex characters, the humour and fun her other YA novels have.