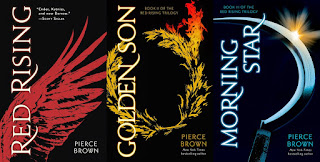 Goodreads Description of book 1, Red Rising:"I live for the dream that my children will be born free," she says. "That they will be what they like. That they will own the land their father gave them."

Eo kisses my cheek. "Then you must live for more."Darrow is a Red, a member of the lowest caste in the color-coded society of the future. Like his fellow Reds, he works all day, believing that he and his people are making the surface of Mars livable for future generations.Yet he spends his life willingly, knowing that his blood and sweat will one day result in a better world for his children.But Darrow and his kind have been betrayed. Soon he discovers that humanity already reached the surface generations ago. Vast cities and sprawling parks spread across the planet. Darrow—and Reds like him—are nothing more than slaves to a decadent ruling class.Inspired by a longing for justice, and driven by the memory of lost love, Darrow sacrifices everything to infiltrate the legendary Institute, a proving ground for the dominant Gold caste, where the next generation of humanity's overlords struggle for power. He will be forced to compete for his life and the very future of civilization against the best and most brutal of Society's ruling class. There, he will stop at nothing to bring down his enemies... even if it means he has to become one of them to do so.


My thoughts:
There is a lot of hype surrounding this trilogy so I went in with very high expectations and I am pleased to say that I was not disappointed. I liked the first book and really liked the second book and loved the third. The Red Rising Trilogy is definitely one that gets better with every book!

Book 1, Red Rising felt similar to some other YA dystopian/fantasy books. I felt like I was rereading something I'd already read before which is not necessarily a bad thing but I was expecting something more unique.

It took me a while to get into. The plot was very slow to start but I pushed through and the second half was fantastic and as I said the series gets better with each book

I had a hard time understanding the world in the beginning. There is a lot of info dumps in the first book he first book and I kept getting lost in the explanations but I kept reading and somewhere during the second book it all kind of clicked in my head. Side note on the world building: there is a lot of unique vocabulary which was really confusing in the beginning. Not everything is explained so you just kind of have to go with it and eventually you get a better understanding.

There wasn't a lot of scifi stuff in the first book but the 2nd and 3rd are full of it. There is lots of spaceships and technology. There is so many epic Intergalacic battle scenes which blew me away.

Darrow wasn't anything special; to me he felt like a typical YA dystopian protagonist. I loved some of the other characters though; especially Mustang and Sevro who are introduced in the first book.

Friendship and loyalty are big parts of the series which I liked. There was lots of betrayals and there was definitely some characters that I wasn't sure if i should trust them or not. And there was some friendships that were developed at a lovely pace.

All in all, I really enjoyed the Red Rising trilogy. I am glad I picked up the second book and continued with the trilogy. While red rising didn't live up to the hype for me Golden Son and Morning Star did! If you are into scifi you  should give the troligy a go.