A Conjuring of Light by VE Schwab 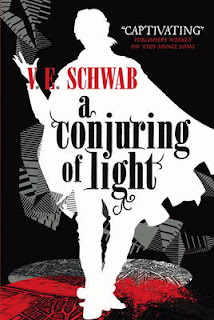 *warning this review contains spoilers for the first two books in the Shades of Magic series, A Darker Shade of Magic and A Gathering of Shadows.

THE BALANCE OF POWER HAS FINALLY TIPPED...
The precarious equilibrium among four Londons has reached its breaking point. Once brimming with the red vivacity of magic, darkness casts a shadow over the Maresh Empire, leaving a space for another London to rise.

WHO WILL CRUMBLE?
Kell - once assumed to be the last surviving Antari - begins to waver under the pressure of competing loyalties. And in the wake of tragedy, can Arnes survive?

WHO WILL RISE?
Lila Bard, once a commonplace - but never common - thief, has survived and flourished through a series of magical trials. But now she must learn to control the magic, before it bleeds her dry. Meanwhile, the disgraced Captain Alucard Emery of the Night Spire collects his crew, attempting a race against time to acquire the impossible.

WHO WILL TAKE CONTROL?
And an ancient enemy returns to claim a crown while a fallen hero tries to save a world in decay.

My thoughts:
A Conjuring of Light is the brilliant conclusion to a fanatic trilogy I was hoping for! This series has made it onto my favourite series shelf and will stay there for a long time! I had so much fun with this series especially this final book!

My favourite character is of course Lila but I love Alucard too but also Kell and Rhy. So basically everyone. Lila is her usual bad ass self; so witty and hilarious; I love her and Kell's relationship but really liked her and Alucard's friendship in this one! I loved how sassy Rhy was and how he had such a nice arc in this final book, he really steps up and becomes as selfless as his brother.

There was lots of Holland in A Conjuring of Light and he even had a POV where we are given lots of his backstory which I wasn't a fan of. I just didn't care about him to be honest. He had a nice arc but I dreaded his chapters. I found them so boring; they were important to understanding him and his character growth but I just wanted to stay with Lila and the others. I found Holland's chapters to be so slow and they definitely affected my reading experience.

The plot was up and down and all over the place and I loved it! There was super intense crazy parts and then slower calmer more character driven parts and I loved it. A jean really got the balance just right.

The writing was of course as elegant and beautiful as it always is with VE Schawb! It's so simple but so not at the same time. She's one of my favourite authors for sure.

A conjuring of Light was a lovely end to the trilogy, everything wrapped up nicely but there were a few tiny loose threads but it didn't bother me as it was nothing major. I really wish we could spend more time with these characters and see what adventures they go on next.
ACoL might be my favourite in the series, i haven't decided yet though because I loved book 1 so much!

My rating: 4.5 stars
Thanks for reading,