The Lesser Bohemians by Eimear McBride 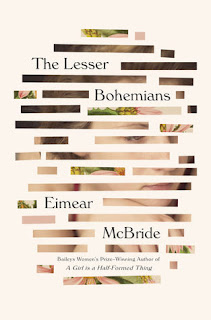 Goodreads Description:
The captivating new novel from Eimear McBride, critically acclaimed and Baileys Women’s Prize-winning author of A Girl Is a Half-formed Thing.

Upon her arrival in London, an 18-year-old Irish girl begins anew as a drama student, with all the hopes of any young actress searching for the fame she’s always dreamed of. She struggles to fit in—she’s young and unexotic, a naive new girl—but soon she forges friendships and finds a place for herself in the big city.

Then she meets an attractive older man. He’s an established actor, 20 years older, and the inevitable clamorous relationship that ensues is one that will change her forever.

A redemptive, captivating story of passion and innocence set across the bedsits of mid-1990s London, McBride holds new love under her fierce gaze, giving us all a chance to remember what it’s like to fall hard for another.

My thoughts:
The Lesser Bohemians is not a book I'd typically pick up but my friend recommended it and asked me to go to an event the author was having so I decided to give it a go and turns out there's a reason I never pick up books like this; I really didn't like it. I don't think I'm ready for the world of literary fiction; I happy with YA and children's books and think I will be for a long long time.

I found the first half of The Lesser Bohemians super hard to get through. I got the hang of the writing style pretty quickly and liked it but found it so hard to stay interested and focused on the story, there was no plot, it's just the two main characters having sex the whole time and I hated it. I couldn't get behind their relationship, due to the age difference and I couldn't believe how quickly she would forgive him for some of his actions. There was some parts that were uncomfortable for me to read.

After the half way mark though it started to get better. The story starts to focus in on the characters themselves and their backstories not their relationship ship. I had no problems staying interested then. We start to get the whole back story to one of the main characters and I really liked that whole section of the book. I found the character to be really interesting and intriguing.

Stylistically I think The Lesser Bohemians is definitely interesting. The writing style is different from anything else I've ever read. It's written as a stream of consciousness and has no punctuation so it reads very easily once you get the hang of it. I also liked how we aren't given names until later in the book when we start to uncover who theses people are and how flashbacks were used in the second half to help readers slowly piece together the characters story.

I felt like the male main character was developed well but only in the second half. He starts out very flat and is eventually mounded into a very well rounded character. The female main character on the other hand was so underdeveloped. I felt like she was just used as a tool for us to get to know the guy.

Overall The Lesser Bohemians was very meh for me. If I hadn't been going to the event I probably wouldn't have pushed through the first half and DNFed it. I liked the prose but didn't think much of the story.