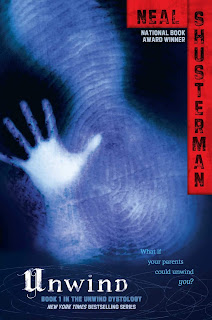 Goodreads Description:
Connor, Risa, and Lev are running for their lives.

The Second Civil War was fought over reproductive rights. The chilling resolution: Life is inviolable from the moment of conception until age thirteen. Between the ages of thirteen and eighteen, however, parents can have their child "unwound," whereby all of the child's organs are transplanted into different donors, so life doesn't technically end. Connor is too difficult for his parents to control. Risa, a ward of the state, is not enough to be kept alive. And Lev is a tithe, a child conceived and raised to be unwound. Together, they may have a chance to escape and to survive.

My thoughts:
Unwind was a bit of a let down for me. I was hesitant to pick it up because the whole concept of being 'unwound' sounded creepy to me and also because of all the hype. I ended up not loving it but not hating it either. I was very busy when I was reading it so it took me forever to get through which probably also played into my reading experience.

The story is told through multiple points of view. I usually don't mind multiple POVs but I felt this sorry could have been executed better had there been one narrator. I was extremely bored reading from Lev's point of view and spent the whole time reading his chapters flicking ahead to see when the next Connor or Risa chapter was coming up.

The characters felt very flat to me. I couldn't relate or emphasise with any of them at all which made it very hard for me to stay interested in the story. I didn't care about any of them. It also didn't help that they all made stupid decisions that had me rolling my eyes.

The start is very slow. I found my attention drifting and had to force myself to keep reading. The plot was very slow and I felt like we were getting nowhere for ages. A lot of the 'twists' were very obvious to me and there was a good few plot holes scattered throughout. I also had to suspend my disbelief a good bit regards to the starts of the story that kicks everything off (like what mother would raise a child for 16 years and then decide to 'unwind' them just because they are acting like a normal teenager?). The pace picked up towards the end though with a good deal of action that kept my attention the majority of the time.

The writing felt very dry. While reading, I didn't feel anything. There was no beautiful sentences I wanted to make note of of share with friends of though provoking passages. It's all very simple, and nothing noteworthy.

I will say the book does make the reader think about the issue of pro life and pro choice. The author even managed to write the whole story without advocating for one side of the debate which I appreciated. However the whole concept of being 'unwound' doesn't really tackle a lot of the issues surrounding abortion.

Overall I was unimpressed but I do want to continue with the series just not right now because of all the hype surrounding it.

Email ThisBlogThis!Share to TwitterShare to FacebookShare to Pinterest
Labels: Dystopian, Sci-fi, YA