The Burning Maze by Rick Riordan 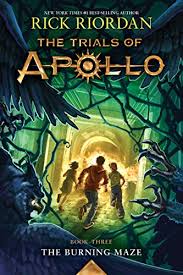 *This post contains spoilers for the previous books in the Trials of Apollo series by Rick Riordan.*

Series: The Trials of Apollo, #3

Publication:  May 1st 2018 by Disney-Hyperion

Goodreads Description:
The formerly glorious god Apollo, cast down to earth in punishment by Zeus, is now an awkward mortal teenager named Lester Papadopoulos. In order to regain his place on Mount Olympus, Lester must restore five Oracles that have gone dark. But he has to achieve this impossible task without having any godly powers and while being duty-bound to a confounding young daughter of Demeter named Meg. Thanks a lot, Dad.

With the help of some demigod friends, Lester managed to survive his first two trials, one at Camp Half-Blood, and one in Indianapolis, where Meg received the Dark Prophecy. The words she uttered while seated on the Throne of Memory revealed that an evil triumvirate of Roman emperors plans to attack Camp Jupiter. While Leo flies ahead on Festus to warn the Roman camp, Lester and Meg must go through the Labyrinth to find the third emperor—and an Oracle who speaks in word puzzles—somewhere in the American Southwest. There is one glimmer of hope in the gloom-filled prophecy: The cloven guide alone the way does know. They will have a satyr companion, and Meg knows just who to call upon. . . .

My thoughts:
The Burning Maze is my favourite book in the Trials of Apollo series. It  was so much fun to read, it also surprised me and it was also much more emotional than previous books. The stakes are a lot higher in this book and it made for a very enjoyable read.

Apollo's narrations is as hilarious as ever. He has grown a lot over the course of the books, and it is interesting seeing him starting to understand what it is to be mortal. Up until now Apollo has always been my least favourite RR main character but I really grew fond of him in this book.

I was so happy to get to spend time with Grover! We haven't seen him in ages in the books and it was nice having him around.

Speaking of old characters, over the course of the book Apollo and the gang have to get in contact with some of the characters from Heroes of Olympus. Leo played a big role in ... and Jason and Piper are part of The Burning Maze. Piper in particular plays a big role which I loved. I love hanging out with Piper and it was so nice to see her being the badass girl she is in this book.
Some old monsters also make an appearance

The Burning Maze was a surprisingly emotional read for me. Rick Riordan took some risks other authors would shy away from in order to please fans and I liked it. I didn't think he'd have the guts to do what he did in this book but it really made the book stand out against his other demigod books.

It was fun going back into the labyrinth; because you never know what's around the corner I was always anticipating the worst which made it a suspenseful read at times.

The ending was mad. I cannot believe Rick Riordan did that! I need the next book ASAP!

The Burning Maze was for sure the best book on the series so far and I can't wait for the final instalment of this series!
Thanks for reading,