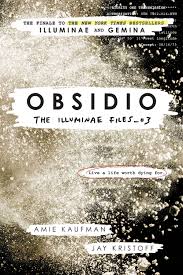 *This post contains spoilers for the first two books in The Illuminae Files series, Illuminae and Gemina.*

Goodreads Description:
Kady, Ezra, Hanna, and Nik narrowly escaped with their lives from the attacks on Heimdall station and now find themselves crammed with 2,000 refugees on the container ship, Mao. With the jump station destroyed and their resources scarce, the only option is to return to Kerenza—but who knows what they'll find seven months after the invasion?

Meanwhile, Kady's cousin, Asha, survived the initial BeiTech assault and has joined Kerenza's ragtag underground resistance. When Rhys—an old flame from Asha's past—reappears on Kerenza, the two find themselves on opposite sides of the conflict.

With time running out, a final battle will be waged on land and in space, heroes will fall, and hearts will be broken.

My thoughts:
Obsidio absolutely blew my mind! It was an amazing concluding novel to this epic sci-fi series! It was such an exciting read!

Liked Rhy- pretty interesting. But nothing compared to Ezra and Nik

Wasn't a fan of Asha- my least favourite of the girls. Wasn't as interesting. Felt very one dimensional.
Despite not being massive fans of either of them I was still rooting for them and was invested in their part they had to play in the series!

I was here for the other characters though. Starting with our original duo: Kady and Ezra have the best banter in the chat rooms that had me laughing out loud. But they also had some very sweet emotional moments too that I loved reading. My favourite parts where any time they were on the page.

Ella and Nik's interactions were such a highlight too!

An unexpected pair that stole the show for me was Nik and Ezra. The two are funny guys by themselves and together they are freaking hilarious! Their unexpected friendship in Obsidio was everything. I was here for it!

Obsidio started in the beginning but then I couldn't read fast enough. The second half of the book was mad. There was so much action it was as intense and crazy as the previous books.

I loved the illustrations by Marie Lu from Hanna's journal- there was a mini comic strip in the story and I was dying reading it. Marie Lu captures Hanna's voice so well in her illustrations. Her personality comes across so well.

Obsidio was such a heart pounding read with lots of action and shocks and I throughly enjoyed every minute of it! It wrapped up the series very nicely and I can't wait to see what Amie Kaufman and Jay Kristoff do next!