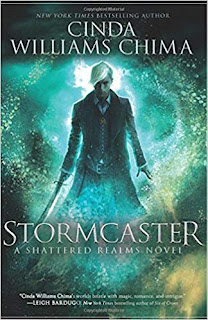 *This post contains spoilers for the first 2 books in the Shattered Realms series, Flamecaster and Shadowcaster*

The empress in the east—the unspeakably cruel ruler whose power grew in Flamecaster and Shadowcaster—tightens her grip in this chilling third installment in the series.

Vagabond seafarer Evan Strangward can move the ocean and the wind, but his magical abilities seem paltry in comparison to Empress Celestine’s. As Celestine’s bloodsworn armies grow, Evan travels to the Fells to warn the queendom of her imminent invasion. If he can’t convince the Gray Wolf queen to take a stand, he knows that the Seven Realms will fall. Among the dead will be the one person Evan can’t stand to lose.

Meanwhile, the queen’s formidable daughter, Princess Alyssa ana’Raisa, is already a prisoner aboard the empress’s ship. Lyss may be the last remaining hope of bringing down the empress from within her own tightly controlled territory.

Multiple intricately interwoven storylines converge in this gripping novel about a brave, coordinated effort to undermine a horrific tyrant.

My thoughts:
I had the best time reading Stormcaster! It was a phenomenal addition to the Shattered Realms series! I absolutely loved it and it is now tied for first place with shadowcaster as my favourite in the series. I loved it that much!

In Stormcaster all the storylines are weaving together into this bigger plot with higher stakes and I loved it. All our characters are working towards the same plotline by the end of the book.

There are so many characters to keep track of now and I love every single one of them! There are a good few POVs so don't be worrying if you are 300 pages in and still haven't heard from some characters I promise they do get page time! The bad thing about all the POVs is that while I loved all the storylines i hated how I had to wait like 50-100 pages before going back to the ones I was obsessed with. I loved them all but was itching to get back to Ash and Evan in particular.

We were introduced to Evan in Flamecaster but weren't given much information about him until Stormcaster. In this one we get Evan's whole backstory about his childhood and how he met Destin. He quickly became one of my favourite characters.

There are some great pay offs in this book we've been waiting for since book 1 which I loved and even more to come in the next book!

Raisa got a good bit of page time which I wasn't expecting but appreciated because who doesn't love that woman?

Storylines not crossing is something I get frustrated about, I am just such an impatient reader and want the characters to cross paths and interact with each other. But I know all the waiting will pay on when I read the final book! The ending of this one set the next one is very interestingly so I am very excited to see where it goes. I have lots of theories and questions so I am eagerly anticipating Deathcaster!