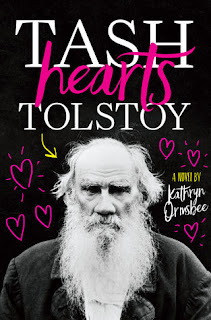 Goodreads Description:
After a shout-out from one of the Internet’s superstar vloggers, Natasha “Tash” Zelenka finds herself and her obscure, amateur web series, Unhappy Families, thrust into the limelight: She’s gone viral.

Her show is a modern adaptation of Anna Karenina—written by Tash’s literary love Count Lev Nikolayevich “Leo” Tolstoy. Tash is a fan of the forty thousand new subscribers, their gushing tweets, and flashy Tumblr GIFs. Not so much the pressure to deliver the best web series ever.

And when Unhappy Families is nominated for a Golden Tuba award, Tash’s cyber-flirtation with Thom Causer, a fellow award nominee, suddenly has the potential to become something IRL—if she can figure out how to tell said crush that she’s romantic asexual.

Tash wants to enjoy her newfound fame, but will she lose her friends in her rise to the top? What would Tolstoy do?

My thoughts:
I had the best time read Tash Hearts Tolstoy! I absolute loved it. It was such a quick addictive fun read!

I loved Tash, she was so well developed and rounded not like other YA contemporary characters who are generic self insert type characters. On top of being obsessed with Tolstoy and making videos she's a vegetarian, Buddhist and identifies as asexual. I loved how there was so many aspects to her!

I also loved how big a role friendship had in this book. Tash's relationships with her best friend Jack and Jack's brother Paul where the 2 main ones. Jack and Tash's friendship was excellently crafted. Their personalities were so different from each other and it made their relationship so complex but it worked. I loved how they argued with each other but always came back together. I also loved Tash's friendship with Paul. He was such a sweet character and they had such a supportive friendship!

Tash being ace is not the main part of the story which I liked but does have a role. I thought it was done sensitively and in a way that educates readers who aren't familiar with the under represented sexuality. I can't speak on it's authenticity but I've heard/read ownvoices reviews from JennaClareK on YouTube on the asexuality rep and she thinks the author did a a great job on it.

I wasn't a huge fan of Thom, I didn't buy into his and Tash's online flirting. I didn't see that much chemistry between them and I was very disappointed with Thom's character arc. Some of his actions later in the book felt very forced and out of character and he ended up feeling like a plot device in my opinion. I think what he did was definitely an important thing to have in the book but was executed badly.

This is a YA Contemporary so of course the plot was very predictable. Not really a critique but something to keep in mind.

My only big issue with Tash Heart's Tolstoy was the side plots with Tash's family and Jack and Paul's family weren't developed enough to impact the story and could have been left out. They didn't add anything substantial to the story.

As someone who watches YouTube and web series it was so cool reading about someone behind the videos. All aspects of the process were mentioned such as scheduling, scripting, filming, editing and even the amount of time it takes to reply to emails and interact with fans on social media!

The ending was satisfying but I wouldn't say no to following these characters around more. I had a lot of fun reading about Tash and her friends and would definitely recommend it if you're looking for a quick read!