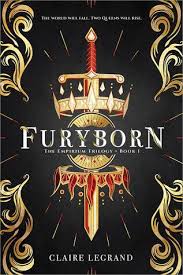 Publication: May 22nd 2018 by Sourcebooks Fire

Goodreads Description:
Follows two fiercely independent young women, centuries apart, who hold the power to save their world...or doom it.

When assassins ambush her best friend, the crown prince, Rielle Dardenne risks everything to save him, exposing her ability to perform all seven kinds of elemental magic. The only people who should possess this extraordinary power are a pair of prophesied queens: a queen of light and salvation and a queen of blood and destruction. To prove she is the Sun Queen, Rielle must endure seven trials to test her magic. If she fails, she will be executed...unless the trials kill her first.

A thousand years later, the legend of Queen Rielle is a mere fairy tale to bounty hunter Eliana Ferracora. When the Undying Empire conquered her kingdom, she embraced violence to keep her family alive. Now, she believes herself untouchable--until her mother vanishes without a trace, along with countless other women in their city. To find her, Eliana joins a rebel captain on a dangerous mission and discovers that the evil at the heart of the empire is more terrible than she ever imagined.

As Rielle and Eliana fight in a cosmic war that spans millennia, their stories intersect, and the shocking connections between them ultimately determine the fate of their world--and of each other.

My thoughts:
Furyborn was very hard for me to get through. I really had to push myself to finish it and considered DNFing it multiple times. I ended up skimming a lot of the second half of the book I was so uninterested. The premise of two young women separated by a 1000 years who are connect sounded so good and it had so much potential but it ended up falling very flat.

The story is told in dual POV with a thousand year time difference. I found myself preferring Rielle's chapters much more over Eliana's. I hadn't a clue what was happening a lot of the time in Eliana's story and really struggled through her chapters. Rielle's was much more interesting as the author really explored the world and magic system in her parts of the book.

The plot was so boring to me. It wasn't even that nothing was happening, there was a good bit of action, but I just wasn't emotionally connected to the characters enough to care what happened them. There were no stakes, I knew so and so would do the right thing and that so and so would win. The lack of tension made it lack any excitement I usually get when reading.

The romance was also very dull. The two main male characters could not have been underdeveloped more. They were so flat and had zero personality.

There was also a lot of tropes which turned me off; such as the useless sibling, the chosen one, trials/tests and more.

The world was very confusing. There's elemental magic and angels and kingdoms at war and I was so confused. I felt like when anything was explained it was brushed over or the author went off on a tangent and I got lost. This left me with very little knowledge about how the magic and society worked in the world.

I also want to let reads know that while this book was being hyped for the past few months a number of authors promoting the book said it has bi rep and I am here to say it doesn't really. The only 'rep' in this book is Rielle implying in one sentence that she flirted with a friend of hers who was a girl and Eliana mentioning she had sex with a woman. There was no evidence in the book that either main character was attracted to both men and women, it was all about the boys for them. I felt like these two passing comments where just thrown in to make the book appeal to those looking for a more diverse read.

Furyborn was not the book for me, I did not enjoy my time read it and I definitely won't be continuing on with this series.