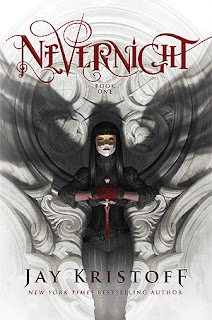 Goodreads Description:
In a land where three suns almost never set, a fledgling killer joins a school of assassins, seeking vengeance against the powers who destroyed her family.

Daughter of an executed traitor, Mia Corvere is barely able to escape her father’s failed rebellion with her life. Alone and friendless, she hides in a city built from the bones of a dead god, hunted by the Senate and her father’s former comrades. But her gift for speaking with the shadows leads her to the door of a retired killer, and a future she never imagined.

Now, Mia is apprenticed to the deadliest flock of assassins in the entire Republic—the Red Church. If she bests her fellow students in contests of steel, poison and the subtle arts, she’ll be inducted among the Blades of the Lady of Blessed Murder, and one step closer to the vengeance she desires. But a killer is loose within the Church’s halls, the bloody secrets of Mia’s past return to haunt her, and a plot to bring down the entire congregation is unfolding in the shadows she so loves.

Will she even survive to initiation, let alone have her revenge?

My thoughts:
Nevernight is an incredible read and a new all time favourite for me. I had the best time reading this fantasy book and could not recommend it enough! I couldn't put it down it was so good.

One of the biggest reasons why I loved this book was the main character, Mia. I loved how morally grey she was, she is an assassin in training and she does do some things and make some decisions that aren't what I'd consider right but I loved her for it. She's was also super badass with her her 'magic'- she has the ability to control shadows and it is so cool! I don't think I've ever read a character like that before and it was fascinating seeing how she used her ability to her advantage. She also has a shadowcat who follows her around and they have the best banter which is also a big reason I loved her; animal companions are my favourite thing! I was rooting for her from the moment I met her, I wanted her to become an assassin and kill the men who executed her family. She was such a fun character to read about!

The plot of Nevernight is one full of action and Chase scenes and suspense and mystery and I loved it! It does take a few chapters before the all gets rolling but I promise if you push through it's worth it! The beginning is a bit slow because the writing is a bit heavy on the world building.

The main setting of Nevernight is the school in which Mia is being trained to be an assassin. The school is very reminiscent of Hogwarts (of Hogwarts was a more dangerous and had ruthless teachers who didn't care about killing the pupils and more) which I loved! The school was so mysterious and had some really cool rooms and stuff.

Jay Kristoff managed to develop some lovely relationships between the characters which I loved. There was some amazing friendships built between Mia and her shadow cat and the other students at the school. There was so much banter and witty dialogue I was here for it!

I've never read a book solely by Jay Kristoff so going in I wasn't if the writing was for me but I loved it. He uses lots of flashbacks, but places them in such a way that they don't drag on and pull the reader out of the present day plot. I particularly loved the first chapter and how he used flashbacks and present day back to back. Along with these flashbacks there is footnotes. I loved the footnotes and thought they were a very clever way to build the world and the narrator was very snarky in them. In the beginning I thought reading them would take me out of the story but it didn't- if I was really into what was happening I'd just keep reading and then at the end of the chapter go back and read the footnotes. I found it's not always necessary to read them to understand what was going on which means you could probably skip them altogether. They were a very clever way to world build though.

I loved the narration style. The story is told in third person. We don't know who the narrator is (though I have theories) but they have such a strong voice and personality it makes the story so much fun to read. They are so snarky and even address the reader which is cool.

The world building is very cleverly done through footnotes. Through them we get information on religion, places, politicians, magic and more. It is a bit dense in the beginning but it drops off as the story gets going.

*it is important to note that this is not a YA book like Jay Kristoffs other books like the Illuminae Files- Nevernight contains mature content so please be aware of that before going in. There is graphic violence and sex scenes as well as a lot of swear words*

I had a blast reading Nevernight and am dying to pick up Godsgrave after that ending the had me on the edge of my seat and left me with a million questions!