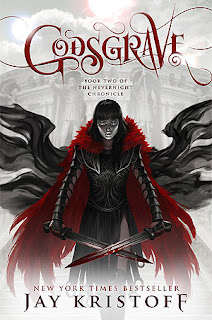 *Warning: this post contains spoilers for the first book in the series, Nevernight by Jay Kristoff*

Assassin Mia Corvere has found her place among the Blades of Our Lady of Blessed Murder, but many in the Red Church ministry think she’s far from earned it. Plying her bloody trade in a backwater of the Republic, she’s no closer to ending Consul Scaeva and Cardinal Duomo, or avenging her familia. And after a deadly confrontation with an old enemy, Mia begins to suspect the motives of the Red Church itself.

When it’s announced that Scaeva and Duomo will be making a rare public appearance at the conclusion of the grand games in Godsgrave, Mia defies the Church and sells herself to a gladiatorial collegium for a chance to finally end them. Upon the sands of the arena, Mia finds new allies, bitter rivals, and more questions about her strange affinity for the shadows. But as conspiracies unfold within the collegium walls, and the body count rises, Mia will be forced to choose between loyalty and revenge, and uncover a secret that could change the very face of her world.

Set in the world of Nevernight, which Publishers Weekly called “absorbing in its complexity and bold in its bloodiness,” Godsgrave will continue to thrill and satisfy fantasy fans everywhere.

My thoughts:
Godsgrave is even more spectacular than Nevernight which I didn't think was possible. Jay Kristoff wrote a phenomenal sequel, no second book slump in this series for sure! I finished Godsgrave even more obsessed with this series and eagerly anticipating the third book!

I love Mia. She has quickly become one of my all time favourite characters. She's just as ruthless and brutal as she was in Nevernight but she starting to question herself and others motives in Godsgrave. She has some beautiful character development that I loved reading.

There is lots of new characters introduced in Godsgrave, some I really liked and some I didn't. The one character other than Mia who I am no obsessed with is Ash. Ash is an absolute queen and I would die for her along with Mia. The tension between the two was off the charts and I was here for it! I finished the book obsessed with the two of them!

Mr kindly and eclipse hang out a good deal in this book after Mia takes on Eclipse at the end of Nevernight and can I just say they are hilarious together. Anytime they were together I was laughing out loud.

The plot of Godsgrave is even more bloody and intense than Nevernight. Jay Kristoff packed in so many twists and turns and I loved every second of it!  All the action had me flicking the pages nonstop I was so stressed out reading. I loved the whole plot of Mia going to the gladiatorial collegium and the games/trials she had to take part in.

There a lots more world building to add to what we learned in Nevernight. The world building is done through more footnotes- I skipped a lot of them because they were in the middle of action scenes and I couldn't stop reading but there was some really interesting stuff about the world and the politics and religion.

The ending had me shook. I was absolutely gobsmacked reading the last chunk. Jay Kristoff is fantastic at reveals and endings!

Godsgrave blew me away. I loved reading about Mia and Ash and all the bloody and intense action going down and I am eagerly anticipating the third book!