The Kiss Quotient by Helen Hoang 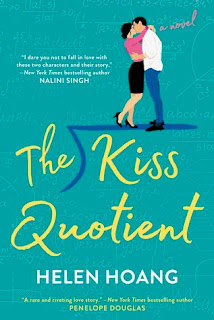 Goodreads Description:
A heartwarming and refreshing debut novel that proves one thing: there's not enough data in the world to predict what will make your heart tick.

Stella Lane thinks math is the only thing that unites the universe. She comes up with algorithms to predict customer purchases--a job that has given her more money than she knows what to do with, and way less experience in the dating department than the average thirty-year-old.

It doesn't help that Stella has Asperger's and French kissing reminds her of a shark getting its teeth cleaned by pilot fish. Her conclusion: she needs lots of practice--with a professional. Which is why she hires escort Michael Phan. The Vietnamese and Swedish stunner can't afford to turn down Stella's offer, and agrees to help her check off all the boxes on her lesson plan--from foreplay to more-than-missionary position...

Before long, Stella not only learns to appreciate his kisses, but to crave all the other things he's making her feel. Soon, their no-nonsense partnership starts making a strange kind of sense. And the pattern that emerges will convince Stella that love is the best kind of logic...

My thoughts:
I was pleasantly surprised by The Kiss Quotient but it also was not what I was expecting. It was my own fault, the only thing I knew about The Kiss Quotient before going into it was that if you liked The Hating Game you'd like it. So I want in expecting it to be similar enough but it wasn't.

Stella was such a fun main character. I loved reading about! Her personality really comes off the page and she was so well developed she was a joy to read! I really liked her. Stella also has  autism which is a big part of her character, I can't speak on the rep but she's an ownvoices character as the author also has autism. I found it very interesting learning about how Stella deals with her autism as I've studied it in college briefly and have always been interested in learning more. Of course Stella is fictional and only one persons experience it was nice learning more about autism.

While I really liked Stella I wasn't a huge fan of Michael. One aspect of his character was cool but I can't say what because of spoilers but mostly he just felt very one dimensional. I didn't feel for him at all.

The romance was alright but I wasn't super invested in it or rooting for them. I felt like there was hardly any time spent getting to know each other. A bit of an insta-love situation. It's steamy but not romantic.

The thing I didn't like was kind of my own fault. I really should have read the description first because this is not my kind of book based on the description. It was a lot steamier than I expected which threw me off. I wish they'd toned it down a bit, as it got a bit repetitive and I wasn't a fan of how much smut there was, I ended up skimming a lot of it. I know now after reading the description that I should have expected that but I was silly and went in blind.

The Kiss Quotient wasn't what I expected but had fun reading for the most part.